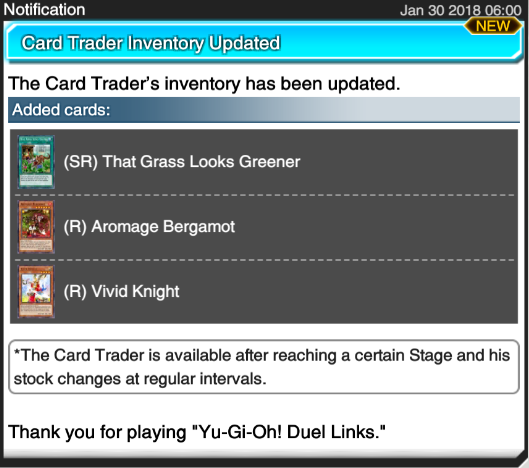 The Card Trader's inventory has been updated with some new additions to his card pool.

Loading... only really has synergy with Bujins at the moment, and I don't think they'd run him.

Loading... has potential in future Plant decks because it seems like a really nice semi-boss monster in a consistent, swarming Plant deck with other 1-tribute monsters (so that Loading... could be used), which we don't have yet.

Loading... is not very impressive. Could see play if Bujins become meta, but even then I don't think most Bujin decks are going to want to waste a normal summon on this card.

Loading... : The current plant decks we have doesn't really synergize with "LP Gain", so I don't think this card is going to see play. Maybe in some YouTube decks, but at first glance without looking into specific cards in the game that might synergize with it, I would say this is not going to see any real play.

Loading... is very exciting, mostly for decks we will eventually see in the future, but also for certain top-tier competitive decks right now. It may see play in Red-Eyes Zombies and Red-Eyes Slash Dragon. It may also push decks like Bujins, Plants, graveyard banishers and others to competitive status.