Published on February 5th, 2019 by
Dkayed

Why would you use a Sea Stealth Attack deck

Good ‘SSA' builds are fun to use. They frequently offer the player choice during a duel and usually require you to plan a turn or 2 ahead. ‘SSA’ is a ‘non linear deck’, and duels are diverse. The deck requires hand management and field management, involves deck management, and even has interactions with the graveyard. If ‘SSA’ players survive the first few turns, duels can take many turns and duel skills can pay off. The deck has few unwinnable matchups, and rarely has unplayable opening hands.

The deck gives players freedom in deck building because of the broadness of the ‘archetype’ and the room for tech choices. People have topped Meta Weekly tournaments with different variants, including: ‘control SSA', ‘Grass SSA’, ‘turbo SSA’ (with and without Loading... ), ‘Dino SSA’, and ‘Necro SSA’. The most competitive variant alone, ‘control SSA’, offers the player some deck building choices, namely regarding the back row cards, synchro monsters, a tech WATER monster or two, the back row / monster ratio, and to some extent the number of cards in the deck.

‘SSA’ is a fun and flexible rogue deck that has been underestimated and underused. 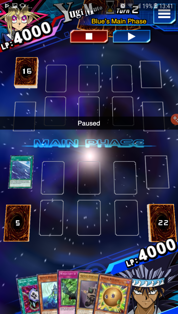 ‘SSA control’ is a deck with an unusual history, because after the release of a core card it took around 1.5 months for people to discover a competitive build and almost 3 months to find an optimal one. It is unknown to many players that in December 2018 a major innovation was made to the ‘SSA’ deck and that in January 2019 it became apparent that this innovation has allowed the deck to get far in tournaments and with some luck even win one until March 2019. The deck was given tier 3 status for a week in February 2019.

The public opinion on Loading... decks seems to be that they are easily disrupted, and that one Loading... would in most cases mean defeat for the ‘SSA’ player. The most successful ‘SSA’ builds have many ways to deal with the opponent’s cards besides Loading... : plenty of back row cards, reliable access to spot removal with Loading... (and Loading... ) and consistent access to synchro monsters.

While players should be able to reach King of Games with SSA, it seems that the SSA deck has lost its competitiveness. While it was still topping every Meta Weekly in March 2019, in the periods of April and May 2019, the deck only topped Meta Weekly 73. The start of April coincided with the rise of a Six Samurai metagame (or ‘meta’). This meta and the subsequent Neos meta meant a prevalence of monster with high ATK points unaffected by effect destruction. The latter has undermined one of SSA’s key strengths and SSA decks have had to let go of some of its power to adapt to it. Since the Neos meta, decks have increased their ability to swarm the board with high ATK monsters, which seem to give SSA decks further trouble. The deck has however also gained much power in the form of new Synchro monsters including Loading... , Loading... and Loading... .

A SSA control deck has many tools, which allows its user to adapt the deck to the meta and to adapt his/her in game strategy to the duel situation. When the deck is performing at its best, it gives the user a feeling of having complete control over the duel, keeping counter cards and counter tactics in hand, safely navigating to victory even if it may take many turns to actually arrive there. At those moments, to an outsider, it seems like the deck has an answer to everything.

Hi, I am Apoptosis. I have been using WATER decks for a long time, even when very few people were using them. I was ‘still’ experimenting with Loading... decks when ‘Abyss Encounters’ came out and was still using a ‘SSA’ deck in tournaments in June 2018. In November 2018 I pulled Loading... out of a pack, (re)discovered the potential of ‘SSA’ decks and since then have been experimenting in an attempt to craft a tier worthy ‘SSA’ deck.

The history of SSA Control

The discovery of the 26-28 cards SSA control build is a result of a series of innovations, and of effort, discussion and chance.

In November 2018, independently from Amaba, I created similar builds to the one that he/she used to reach top 32 in MCS 13. I found the decks decent but not tier worthy. I more or less gave up after extensive testing and published my findings on Reddit.

Reddit user ‘indirectt’ suggested playing with 30 cards without Loading... and that idea inspired me to continue my search for a competitive build. The 30 cards ‘Grassless’ build performed well, although not much better than the 20 cards builds.