Hi guys, welcome to my first little write up. If you are asking why I'm doing this, it's simply my reaction after the RRQ ended ridiculously for me. I removed Duel Links completely after this weekend and I really wanted to quit. If you want to know why, keep reading. I will also talk about the skill changes and the cards who will get on the limited list. So if you are interested in multiple opinions, here is mine!

I started playing the event punctually 7am CET under the Name 'AwesomeMiz'. If some of you guys remembered the high score List I reached Top 3 really quickly and stayed for half of the day there until I reached 26k points (sadly I have no proof because I deleted the screenshots since it was day 1 and this write up was not planned). To make those points I played Sylvans first up to 10k and switched really quickly to Spellbooks after I realized that Sylvans became more popular. After I reached 26k points an interesting thing happened to me the FIRST time: I went down 10k points straight, because I ONLY drew useless hands. To clarify: this was 15 starting hands of trash. 5 hands were restarted and after this I switched (after a 1 hour break) back to Sylvans because I really felt betrayed by Spellbooks. After this incredible losing streak, I went back to 21k, but I couldn't break the 22k before midnight. I ended with 28k using Spellbooks again, where rank 10 EU had 33k points.

I don't know why, but day 2 is always the hardest day for me to make points. There is nothing special to say. I switched between Mask Heroes, Sylvans, Spellbooks and Amazoness and ended with 38k points (Rank 10 before going to sleep 44k points).

The final day was for me overwhelming proof of what a cucky game we are playing here! At the beginning, it was a back and forth between 42k and 36k points playing Spellbooks. This was mostly because they were coinflip games and everybody played them on this level. At this time I had Dkayed in mind saying 'always be one step ahead of the meta' and I created this nice prank of a deck:

As you can see, I'm running 29 cards. I thought 30 was not really needed against Spellbooks. In the first version I played Heavy Starter because I wanted to give them quick OTK's with the big boys. However, I switched to Restart after I had a lot of turns without having Loading... early. Plus, Spellbooks can't OTK you in the first rounds usually without using Loading... . I used this deck to come back from 36k points up to 51k points which was rank 8 EU in the early evening. I was really happy with this, but the streak of this deck ended while I played the same guys over and over and they adjusted their playstyle because they learned that I played cards like Loading... and Loading... that were definitely the game makers in this Deck!
Back to 47k points I switched to Masked Heroes because it was early in the evening and time was running out. I needed quick wins to make the top cut! 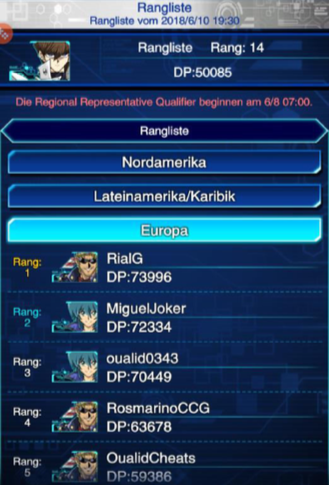 This screenshot was made by achieving 50k points again. At this time OualidCheats (aka Whybona) had 59k points. At this point CONGRATULATIONS to WHYBONA who made first place up from there! He played Masked Heroes the complete night too and I can't remember a single mirror match I lost to him!

I came up to 55k points with Heroes and I really thought Top 3 is possible with using them (at this time rank 3 had 62k points!). But I really had to end up there!!! In 20 minutes I lost 9k points due to this cheater who used 3 accounts with different names (2 of them were in the Top10 at this time) but always the same Labyrinth Builder deck. His APK allowed him to see your facedowns, the cards on top of your deck and your hand and if he decides that he can't win anymore the game loads/freezes in phases like draw or standby phase and the only way to get out of this hell is to scoop by loosing the duel!! At 3am I was completely destroyed. This guy demolished all my hard work. But on top of this, after a 30 minute break, I got a second float of bricks with Masked Heroes like i had on Day 1 and I quickly went down to 37k points, where I stopped because it was 5:30 in the morning.

After something like this happens, you are really questioning yourself 'Why I'm doing this?', 'Why the hell do I have so much bad luck?'. Again: Whybona played Masked Heroes too (I don't know if he did this to the end, but he played them a long time and made incredible amount of points!) and this was definitely what was needed for the rest of the RRQ. To make this clear: Bricks happen and they are part of every card game, I know that! However, if they happen over and over again like in waves there is something wrong with the game. You can tell me what you want and I'm not the only player who had this problem! A second example: I played LoreRomaCCG and RosmarinoCCG multiple times on this grind. They are absolutely great players, no questions. In every single game I faced them without any exceptional, they had always the option to do Loading... into Loading... in the first turn! When I played Spellbooks it was so seldom that I could do this - don't ask me why, but this is a part of this game that happens, but which is not really nice!