Treasure Rooms arrived, land on one to receive a lot of Millenium Coins and get that sweet rewards from the lottery. Use the Dices in Support Items to make sure you enter the Treasure Room. 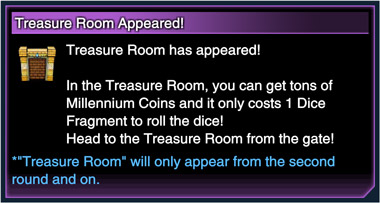 An incredible amount of 100 R Jewels for each round!

The following cards and items can be drawn by the event only Lottery: