New areas are now unlocked, progress to area 40 and obtain new rewards along the way! Also, check out the new "Event Decks" below. 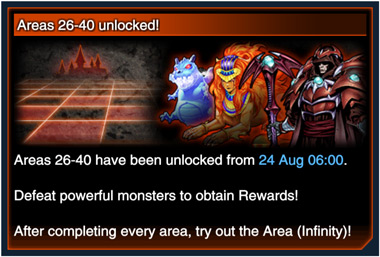 New event missions have been added!

In addition to Gems, Gold, Keys and Jewels, EX Jewels and Booster Items, the following cards can be drawn from the lottery! You can also obtain the cards from the Card Trader EX (he's next to Duel School).

I think rolling a 6 is way too bad for you to play this one.

I don't recall anywhere in the manga where Zorc rolls a die, gets unlucky and nukes himself.

Putting cards back on your opponent's deck can be devastating for them... if it's with an effect like Loading... and not the requirement to attack with a 1700 ATK monster over an attack position monster.

Probably as good as the other "Skilled Magicians".

Other "Skilled Magicians" havent seen play, so this one won't either.

Will find great use in all of those Loading... decks you keep seeing everywhere.

These are the decks you have to use to defeat boss monsters, you can set any deck active as soon you obtain it.