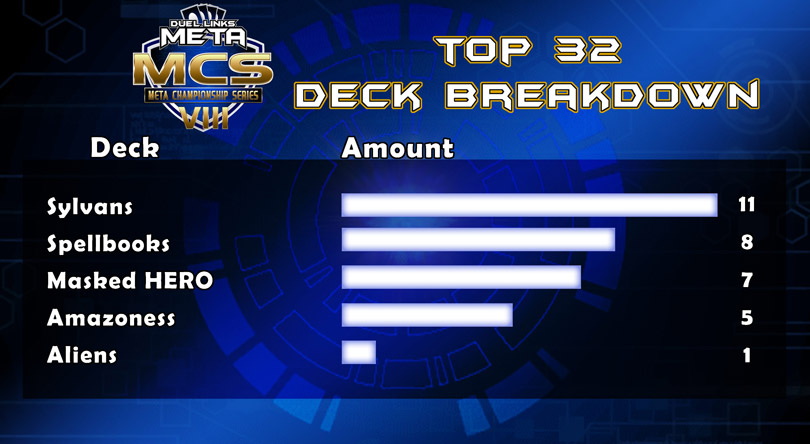 I’m a former TCG player and YCS winner. I know people are both shocked and disgusted that Sylvans took the MCS this weekend, but I wanted to give some people perspective into why I chose this Deck from the mind of a competitive Duel Links player. I love unconventional strategies (meme Decks) as much as everyone else, but this is the Duel Links tournament with a $2000+ prize pool and I wasn’t going to play anything I didn’t consider the best Deck.

People think that this Deck needs Sylvan Komushroomo to flip to win a game and that is simply not true. Rose Lover + Sylvan Guardioak/Sylvan Hermitree is just as powerful. Outside of this, a set World Carrotweight Champion into a Guardioak play can be just as impactful, and all these openings mean that you don’t need to restart into Komushroomo to win games.

I also believe that Grit is the most unfair, and by default best Skill in the game right now. It wins you games you have no business winning. Because you have a ~85% chance to survive an OTK from 4000LP, you will almost always see your 5th card. This means that you will open Sylvan Komushroomo 50% of the time and have an 85% chance to see more cards to de-brick yourself. I believe that Sylvans is consistent enough to not need Restart.

Grit also gives you a chance to use the best Side Deck cards most efficiently. Cards like Last Day of Witch, Needle Ceiling and Warrior Elimination become autowins after your opponent dedicates their entire hand to a gameshot. This allowed me to take games there as well.

I chose to play Sylvans because after going x-2 at the last MCS and not topping I really wanted to play the most unfair Deck for this event. I played Balance Gladiator Beasts for MCS V and ended up losing to Hazy Flame in top 16, played Balance Aliens in MCS VI, and Restart Masked Heroes in MCS VII both times going x-2 and narrowly missing top cut. Each of those tournaments I had a solid idea of what Deck I was registering days in advance. However for this MCS, I had the most trouble deciding on what Deck to take and ended up only settling the night before.

For everyone thinking that the only option moving forward is to play degenerate helmet “Skillvans” to remain competitive this is not the case. As I said initially I think the Deck was in the best position for this tournament because of people over-dedicating to the 2 new Decks (Amazoness and Spellbooks), and as a result it took the most top cut slots and won. However, I still think there are 2 Decks in the format that are better than it, and as people begin to dedicate slots to counter Sylvans the other Decks will become better and clap Sylvans.

The reason I chose this deck is because with the introduction of Amazoness, Heroes became worse as depending on their build that Match-Up can be really hard (it’s not nearly as bad as people make it out to be thogh). With the right build Heroes can still dominate the meta and they were my 2nd choice for this event.

Going into the event I thought that Amazoness would be the most represented deck and that Match-Up is very easy for you as Prophecy almost always wins you the game. They can’t recover from the massive card advantage you generate and the huge tempo swing (tbh one resolved Reaper is an auto win against almost everything which was another reason for me to play this deck). I know I lost to them in top 4 but in general you are highly favoured, didn’t draw a way to resolve Reaper and then it becomes harder and harder. You still have win options but if they can swarm you don’t win with the Fate recycle strategy which is what happened twice.

Because of Amazoness I also thought Sylvans would be more popular, they have a really good Match-Up against them too and that Match-Up is super free (I think this was the most represented deck which helped a lot). They can pretty much only win with their side and you have Cosmic Cyclones for that.

I expected Heroes to still be popular because Sylvans are a good Match-Up for them and Amazoness isn’t bad if you deck build against it. Normally against you it’s pretty even but they need to know exactly how to play and if they don’t you have an advantage. Offerings can be a cuck but I didn’t think everyone would have it and the people that did wouldn’t necessarily main it because of the lack of testing with the card. Even if they have it and open with it, it’s not an auto lose, you have extenders, Grass being the best one. As you see Spellbooks have a lot of good Match-Ups in this meta and most of them are extremely in your favour so it was the best deck for this event.

Something that Stevie, the winner of this MCS pointed out in his tournament report was also a slight part of the reason I chose this deck: the theory that you need to get lucky to win (while I didn’t win, I got far). Here is what Patrick Hoban, one of the greatest TCG players said about this: “[…] to be honest you’re not going to top, let alone win, an event without getting lucky a couple times along the way. I think it’s good to play cards that will give you that chance to get lucky.”

I think Spellbooks were favoured in top cut because they were the most powerful deck. Its completely unfair when it goes off you win against almost everything. It just has these auto wins which is always good to have for a deck. I assume that’s part of the reason why it did so well in top cut ending up with 2 top 4 spots.

*You can read his full write-up here.

Tell us your thoughts in the comments below!