How to XYZ summon

Just like Synchro Monsters, Xyz Monsters have their own type of Summon that you perform when you want to play them. Here’s how Xyz Summons work: When you control 2 face-up monsters with the same Level, they would be put on top of each other, then the appropriate Xyz Monsters would be put on top of them. Note that the materials are listed on the card like any other extra deck mechanic and will sometimes require more monsters to make 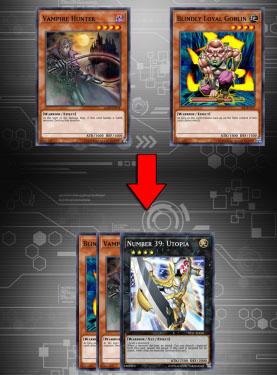 Like for example Number 39: Utopia requires 2 level 4 monsters to make. The monsters you used to Summon it become the “Xyz Materials” of your Xyz Monster and are not sent to the Graveyard; instead they stay under the Xyz monster until you use them for that monster’s effects or the Xyz Monster is destroyed. An Xyz Summon is a type of Special Summon, just like a Synchro Summon, and it follows all the same rules for reviving your monsters if they are destroyed. 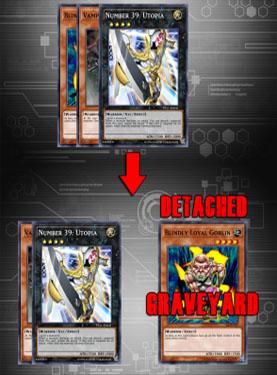 New mechanic means new rules to follow or know about for all the newbies out there:

So firstly Xyz Materials underneath Xyz Monsters do not count as monsters, so detached Xyz Materials will be sent to the Graveyard regardless if there’s a card that would let them be banished or return from the hand. While monsters are acting as Xyz Materials, they cannot be targeted nor apply their effects. Also even if the Xyz Monster would be flipped face-down by cards like Floodgate Trap Hole or Paleozoic Canadia or gets stolen by the opponent by using Enemy Controller, the Xyz Materials will stay until the Xyz Monster moves from the field to a zone other than the field like using Raigeki Break to destroy it or Karma Cut to banish the XYZ Monster.

Hey guys, Shinjo here with this simple introduction to XYZ and I hope this helps you understand how XYZ works. My closing thoughts is that hopefully Konami wouldn’t make the same mistake they did when synchros was implemented where we get a good synchro deck months after its release. Aside from that, I’m looking forward to what konami has in store for us since Xyz summoning is basically one of the most fair and my favorite mechanic in yu-gioh. XYZ summoning opens whole new ideas and opens new possibilities for every deck in which other veteran duelists are looking forward to as well.