Hey everyone! This is the first issue in a series of guides meant for new players just starting up Duel Links for the first time! This first issue will mostly be QUICK, barebones information. More detailed issues will come in the nearby future!

Top 5 Mistakes to Avoid as a New Player

Before we get too in-depth about the game, here are 5 quick tips to keep in mind as a new player:

1) DO NOT spend your Gems, Dream Tickets, or any ingame resources in general without doing some research first! Always have a PLAN!

2) DO NOT convert any card that you have at 3 (the max you can have in a deck) or fewer copies!

3) DO NOT ignore the weekly events (both PVE and PVP)!

4) DO NOT assume that Duel Links is the same as the TCG or OCG!

5) DO NOT get discouraged! Everyone starts somewhere!

This is another quick section to show what resources are available on this website. Keep these links in mind as you read through the rest of this guide and start building your account.

The DLM Tier List is decided by a rotating group of top performing players in the community every week, and is meant to be a snapshot of what decks are expected to perform well in a high stakes competitive environment, such as:

Along with the Tier List is an automated Gem Guide that breaks down the AVERAGE gem cost of each listed deck. This guide is updated in REAL TIME as both top performing tournament decks and King of Games (KoG) decks get posted on the website to keep the data up to date.

These two resources are arguably the best guides on what deck(s) to invest in if you’re planning to get into competitive play. Use them to decide the best deck for you to buy and take to e.g. a MCS, based on your budget.

Warning: Sometimes a deck that is a tiered for competitive play may not necessarily be the best for casual play on the ingame ladder or getting KoG because in ladder there are going to be a wider variety of decks that may have strategies some tiered decks cannot overcome. These decks are typically ANTI-META decks that are built specifically to counter the top decks, but might not have the best matchup spreads all around. This is fine for a high stakes tournament setting, where almost everyone will be playing the top decks, but on the ladder you’ll encounter a wider range of decks, these anti-meta decks may not perform as well as you might expect. Depending on your priorities, always do your research first before actually investing in a deck!

The DLM Top Decks page is a list of submitted decks in the community that (1) did well in a DLM tournament, (2) topped a KC Cup, or (3) reached KoG. This is arguably the best resource on the website for finding the next best performing decks that are not on the Tier List nor Power Rankings (i.e. the best rogue decks). If you’re the type of player who doesn’t like playing meta decks, then use this page to decide what rogue decks may be worth your investment!

The Leaks & Updates page lists any datamined information found by the community after every Duel Links maintenance and update. Here is where you’ll find all the sneak peeks of what is likely to come to Duel Links in the near future. Most important of all are the leaks of upcoming boxes, often a few days to a week before their official reveal ingame. Such leaks can help you decide whether to actually invest in a current deck, or wait for an upcoming box.

Do I NEED a new deck?

The first step in the process is to look at the Tier List and the Gem Guide, but don´t stop looking just yet, keep your research going and go to the Power Rankings and Top Decks Page as these two sources are sources of competitive decks as well. Ask yourself these two questions:

Do I NEED a competitive deck?

If you are winning, hitting the highest rank and are having a good time that is awesome. But if your deck does not fall under the categories of Tier 1, 2, or 3, it would likely then fall under the category of “King of Games Worthy” (KoG Worthy) or “Rogue”, which earlier was defined as good but not mainstream. Arguably, any deck can hit King of Games. If your goal isn’t to play competitively or enter tournaments, and instead to just play a deck that you enjoy, you are free to do just that. However, if you do wish to compete, a deck that is not tiered will have trouble making a deep run into a tournament. Of course nothing is stopping you from competing with said deck, but your tournament experience will definitely be more of a challenge.

I want a competitive deck to compete at the highest level of competitive play? In Duel Links, like many competitive card games, decks will often be given a label that defines their power within the current “meta”. The Metagame, or meta for short, can be commonly understood as the “Most Effective Tactics Available” (although it’s not actually an acronym). In the context of Duel Links, the meta would consist of the most commonly used decks at a given time, which can be a week a month or a year. To stay up to date with meta shifts and changes, you can look at the Duel Links Meta Tier List which is updated weekly by the Duel Links community’s top players.

The Tier List outlines the current meta, And decks are added to or removed from Tiers based on their volume and performance in tournaments*. A deck’s strength is typically defined by a number - Tier 1, 2 or 3 - or some other designation such as “King of Games Worthy” or “Rogue”, which dictates that, while still good, it is outside of the main group of competitive decks. The following three definitions represent the criteria of each tier.

Note: while the format of DuelLinksMeta tournaments do not match the format found on the Ranked Duels ladder, decks that perform well in tournaments generally see similar results in Ranked Duels. ** Note: ‘Top Cut’ refers to the Top 32 bracket of a tournament. In a Meta Championship Series tournament, this generally means performing with a minimum win-rate of 71%.

Seto Kaiba’s pride and joy, Blue-Eyes is a Synchro-based control deck that focuses on summoning multiple Blue-Eyes White Dragon’s, alongside their Synchro monsters, and supporting them with defensive Spells and Traps to wear down your opponent.

For a more detailed look and explanation on the workings of the deck check out the Blue-Eyes guide.

Fully upgrading this deck will give you access to copies of Charge of the Light Brigade and Raiden, Hand of the Lightsworn, powerful cards that are used in other decks and may see play in future decks.

This Free-to-Play Blue-Eyes deck can be built entirely with in-game resources (without spending any real-life money). You can then work towards upgrading it by using Dream Tickets, Ranked Duels Rare Tickets, Card Trader Rewards, and Level-Up Rewards. You can also use your Gems on the Judgement Force Box and upgrade it even further, without spending a dime! 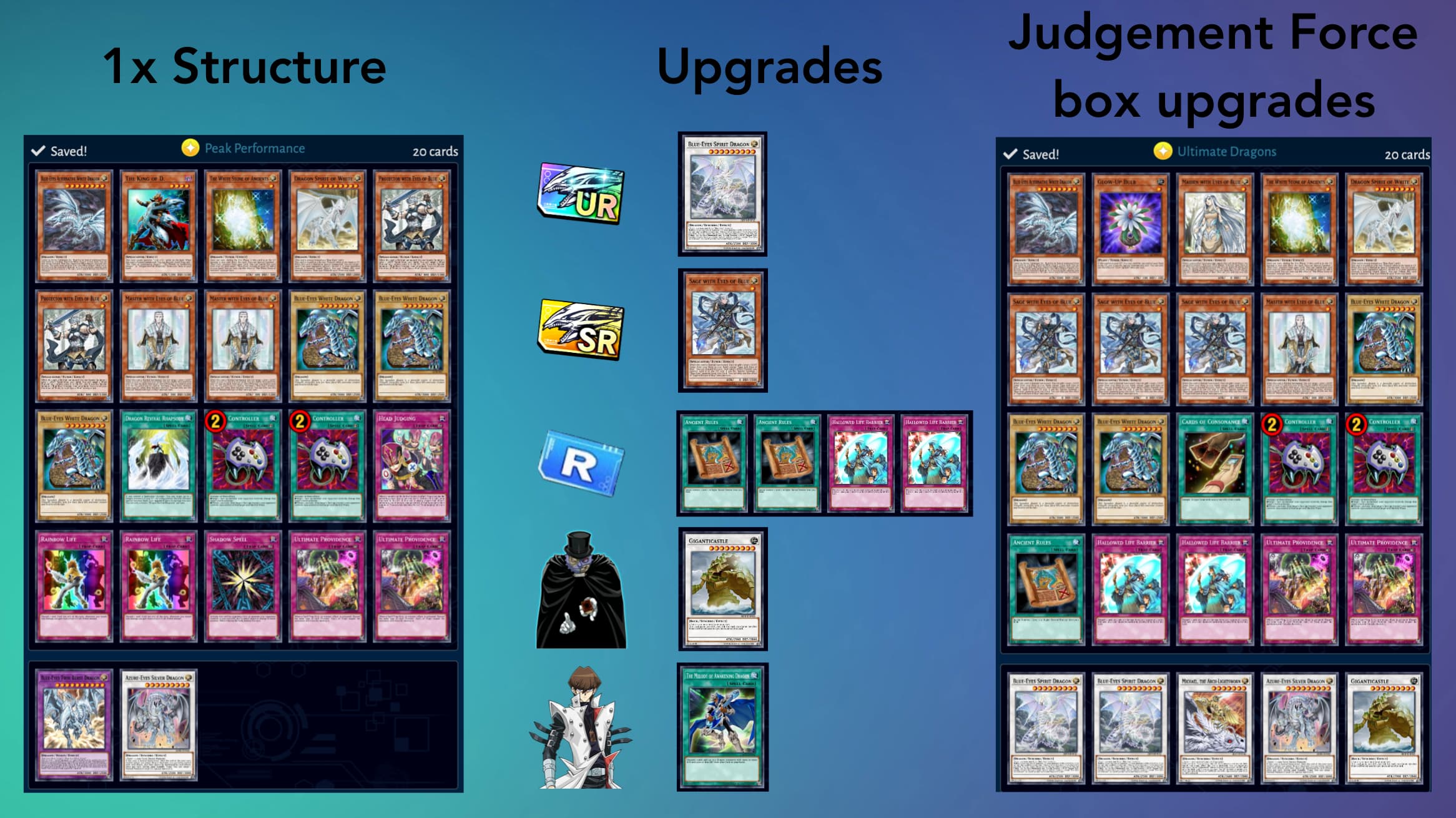 This Budget Blue-Eyes deck can be built by purchasing 3 Blue-Eyes Evolution EX Structure Decks (The first is free for 500 Gems, the second and third can be purchased for less than $15 total). You can then work towards upgrading it by using Dream Tickets, Ranked Duels Rare Tickets, Card Trader Rewards, and Level-Up Rewards. You can also use your Gems on the Judgement Force Box and upgrade it even further. 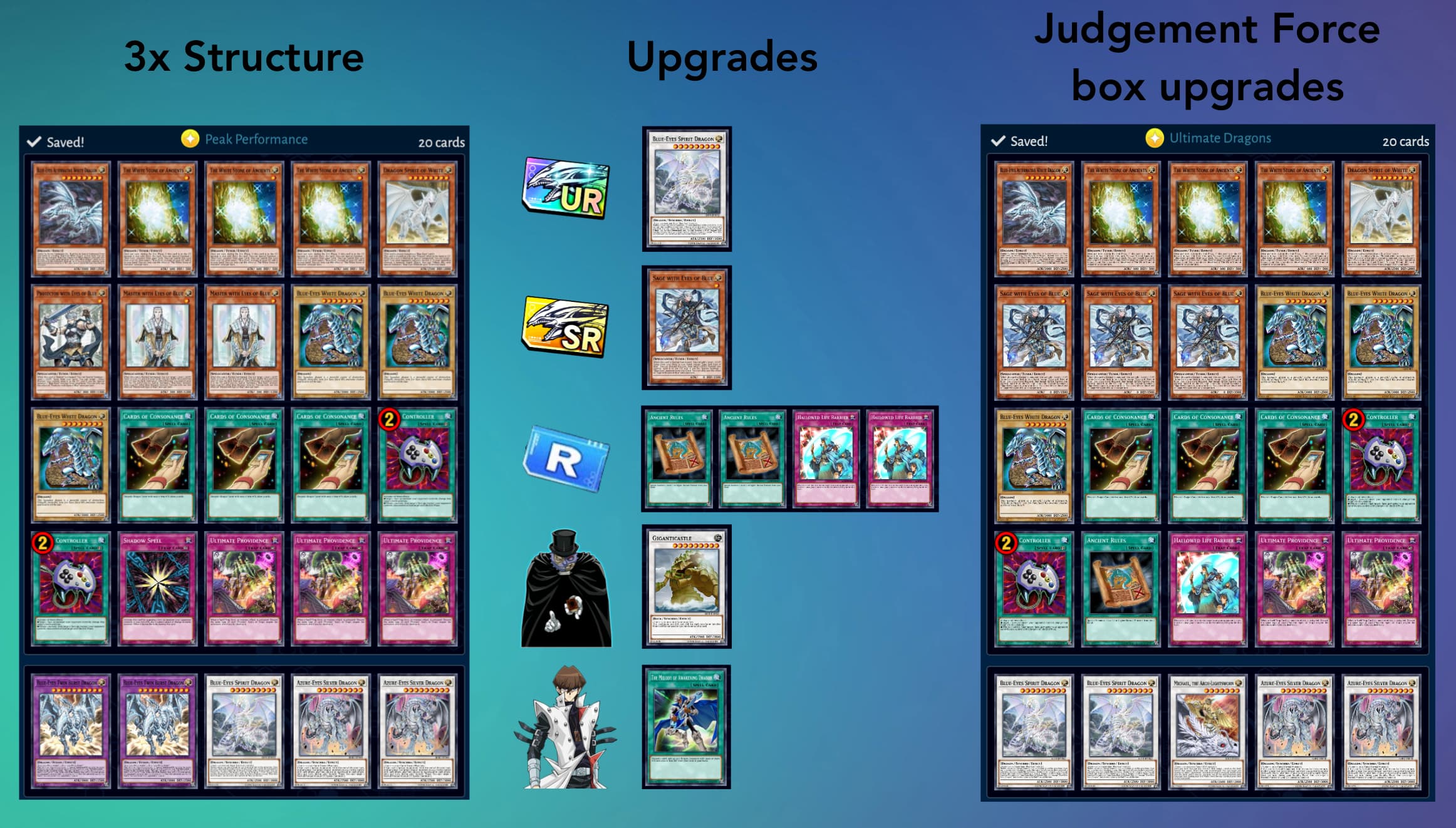 Noble Knights are an Xyz-based combo deck focusing on setting up a strong field Turn 1 before exploding into a barrage of plays Turn 3 and beyond. This deck contains a variety of lines of play and can take some time to get used to, but the reward is one of the Top Decks in the current meta!

For a more detailed look and explanation on the workings of the deck check out the Noble Knights guide.

This Free-to-Play Noble Knight deck can be built entirely with in-game resources (without spending any real-life money). You can then work towards upgrading it by using Dream Tickets, Ranked Duels Rare Tickets, Card Trader Rewards, and Level-Up Rewards. You can also use your Gems on the Infinite Ray Box and upgrade it even further, without spending a dime!

Note: This base deck requires you to obtain Gwenhwyfar, Queen of Noble Arms by spending Gems on the Infinite Ray Main BOX (It’s only a common, but it might require some luck). 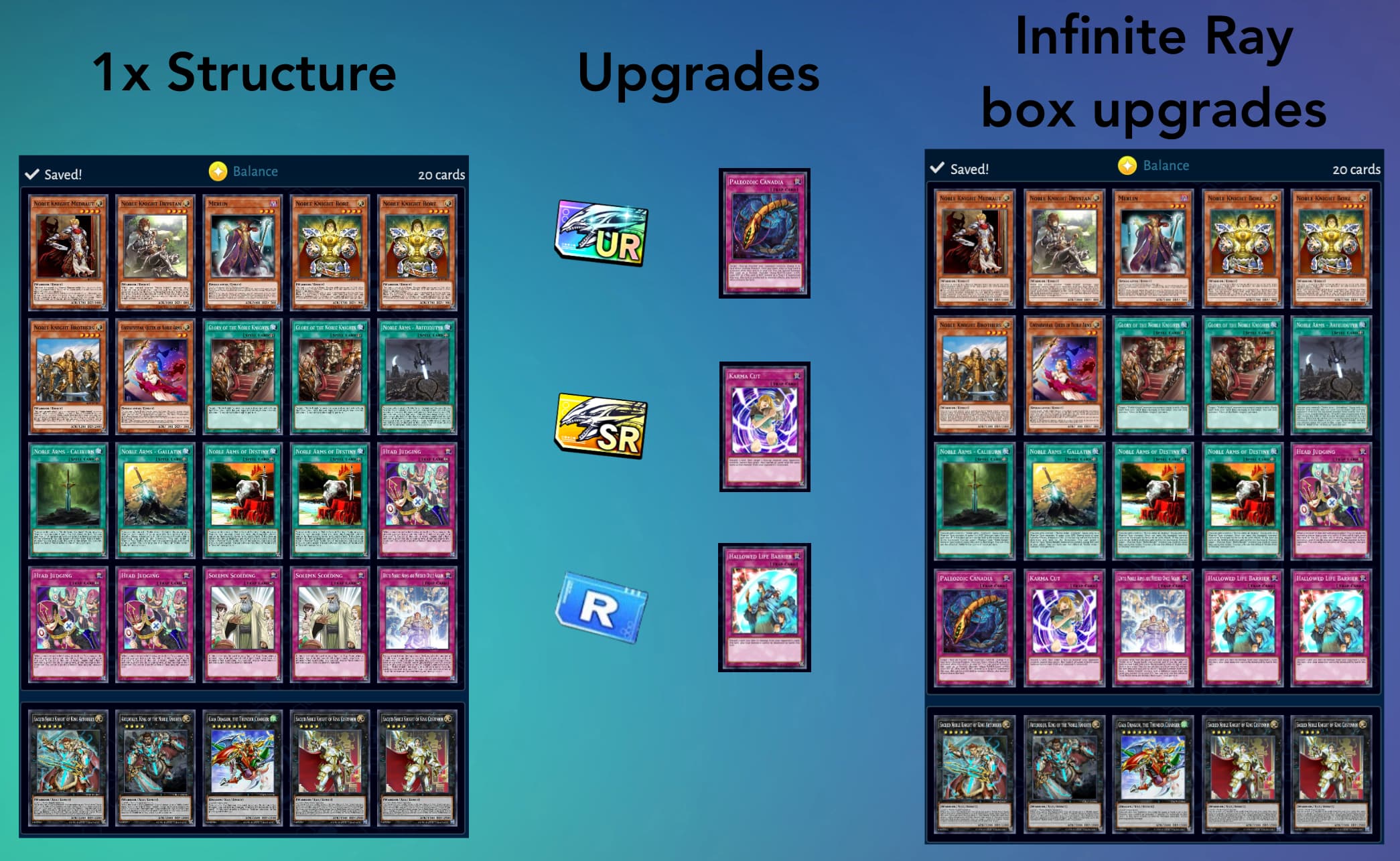 This Budget Noble Knight deck can be built by purchasing 3 Tales of the Noble Knights EX Structure Decks (The first is free for 500 Gems, the second and third can be purchased for less than $15 total). You can then work towards upgrading it by using Dream Tickets, Ranked Duels Rare Tickets, Card Trader Rewards, and Level-Up Rewards. You can also use your Gems on the Judgement Force Box and upgrade it even further.

Note: This base deck requires you to obtain Gwenhwyfar, Queen of Noble Arms by spending Gems on the Infinite Ray Main BOX (It’s only a common, but it might require some luck). 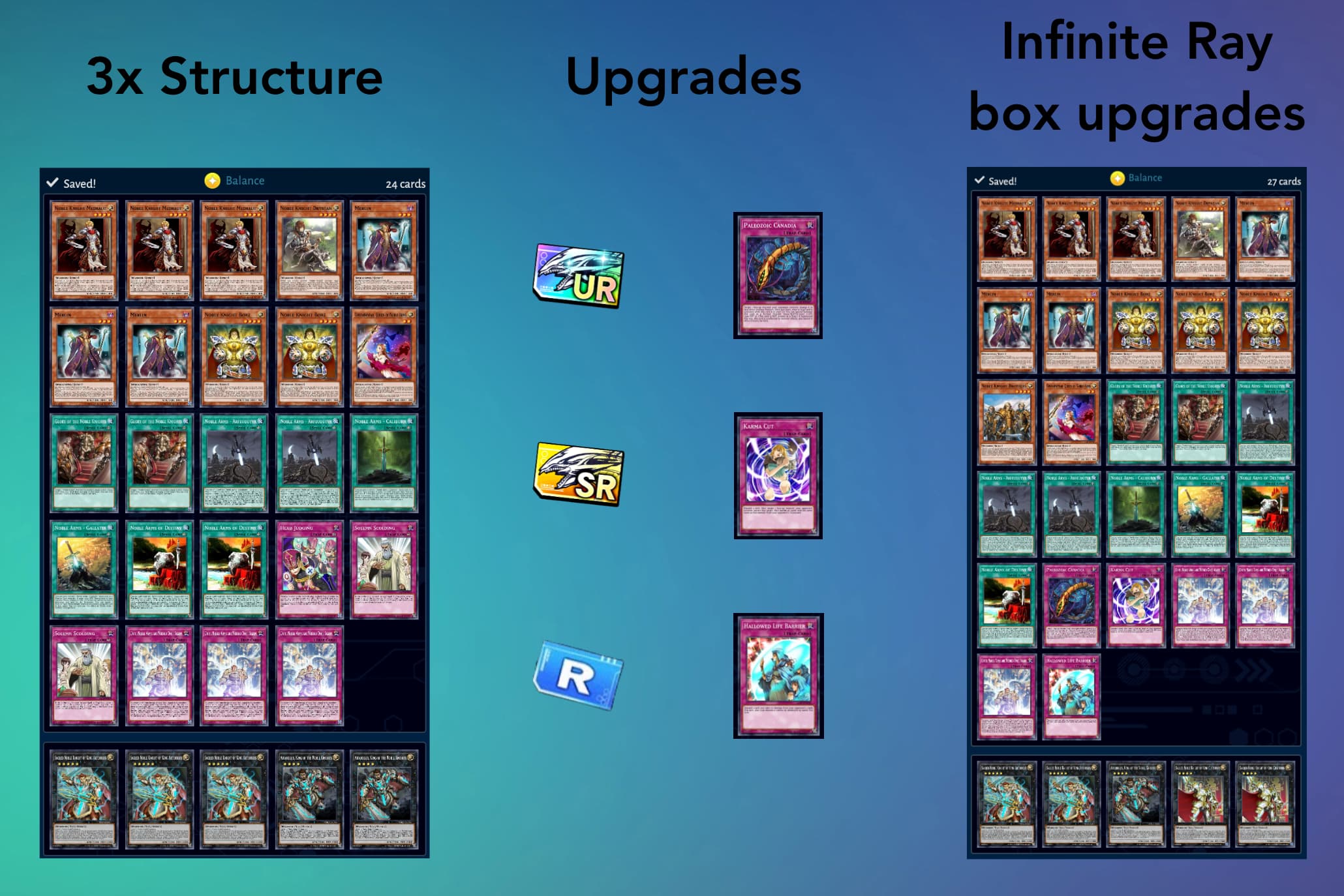